Autumn Orchid is an OC pony I’d adopted from the lovely xwhitedreamsx.  I fell in love with her the moment I saw her (all that gorgeous pink!!!  ^o^) and knew I just had to plush her!  :3

Honestly though… I’m not sure where to start.  This plushie took sooooo long to make >.< like, her hair took waaaaay longer than Mardelia’s.  Now I’m in serious need of a “complex-mane-break”.

Her airbrushing took a lot longer than expected (probably because I’m still really new at it), and those little flowers… omg… those flowers.  They might look small and “insignificant” but they took me a whole day to sew (and were beyond frustrating to work on).

However, despite all the time, effort and frustration involved, I really enjoyed making Autumn.  I got to experiment with a lot of new things including:

1) new alicorn/princess body pattern ^o^ (I chose to plush Autumn’s head using my mare head pattern since that’s what she had in her original reference pic)
2) airbrushing to create gradients!
3) flowers!!

I also managed to use 2 new shannon minky colours – scarlet and banana in her flowers and scarf!  ^o^

Finally, I have to give credit to my hubbie, who helped me with the airbrushing process/cleaning etc.  Without his support, I probably would not have started airbrushing… so THANK YOU SO MUCH!  :3

For my next project, I plan to sew Princess Cadence (for myself), Princess Luna (for sale) (will need to design my alicorn/princess head pattern first) and  Ocean Lotus (Autumn’s little sis who also has gradients!).  I’ll also be casually working on a foalsitter Cadence as a trade with a special DA friend 😛

Just a reminder that my free plushie contest is still ongoing but will be closing in less than 2 weeks’ time:

Categories: All posts, My Little Pony posts, My Sewing 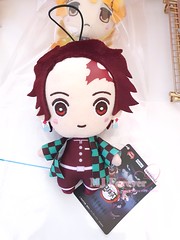