My Little Pony: Flitter has landed!

Woopie! The ‘pegasisters’ have been reunited at last! 😀 Despite not being a big Flitter fan, after seeing how sad and lonely my Cloudchaser looked, I decided to take the plunge and adopt Flitter too! And I’m so happy I made that decision because Flitter plushie is so […] 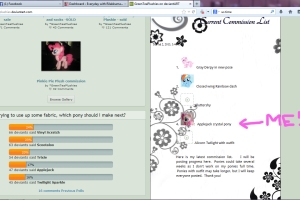 I HAVE A BIG ANNOUNCEMENT TO MAKE! I MADE IT TO GREENTEAPLUSHIES’ COMMISSION LIST!!!!! XD I’m so HAPPY! She’s ONLY one of the MOST elusive/best pony plushie artists out there! She’s only ever opened commissions once in her entire pony plushie career – which would make this time […]

Just got back from an informal GP interview 😀 so now I have time to blog about the other 2 ponies I received in the morning along with Fluttershy #2.  I really should stagger my posts, but meh – I’m too lazy and impatient XD, so sorry for […]

Fluttershy #2 has successfully and safely arrived at her new home today :). She came all the way from Germany! She’s soooo cute and sweet and such a delight! She stands approximately 10″ tall (so she’s a wee little pony) and is made from luxuriously soft cuddly minky […]

My Cutie Mark Crusaders (CMC) is complete! (well, save Babs Seed :<) Joining my Apple Bloom plushie are Sweetie Belle and Scootaloo!!!!! Both are crafted by the talented Lavim – who also crafted my Apple Bloom for me 😀 Like Apple Bloom, they both stand about 31cm tall […]