Rilakkuma and Korilakkuma sleepy time! They both like their munchies before bedtime (like me!) Chick's boring - he's just sleeping

So if you know me relatively well, you would be aware of my video gaming passion.

I used to play a lot of video games when I was a kid… like if I didn’t have my nose in my science books I’d be gaming.  During my primary school years I would usually spend 4-6 hours a day on Tekken 3 with my brother, Paul.

Then I discovered Final Fantasy 7 when I was in college and it became the centre of my life.  I loved it so much I would vivify the characters by writing fan novels and drawing comics about them.  I coined ‘FFF’ as my online alias which stood for ‘Final Fantasy Freak’.  I think I must have clocked the game at least three times? (which is a lot for a kid with a short attention span like myself)

I continued on my Final Fantasy adventure playing FfVIII (huge disappointment of a game live alone the series!), FfIX (was pretty good), FfX (nearly as good as FfVII because Tidus dies in the end), FfX-2 (a bit lame but I still clocked it because I spent a few hundred bucks on it and I was an impoverished child).

Then I started University, met the love of my life and got into med school.  Suddenly I didn’t have any time (or desire) for games anymore.  I thought I was too mature for games… but I was wrong.

Joe, my boyfriend at that time now husband, was a serious gamer… maybe even worse than me.  He was like one of those geeks you’d find living in those dark internet cafes.  He introduced this online game to me called World of Warcraft aka WoW in 2006.  It’s a MMORPG which stands for massively multiplayer online role-playing game.  As its name suggests it’s a genre of role-playing games in which a very large number of players interact with one another within a virtual game world.

At first I thought it was the lamest game ever but then after I made a few friends and completed a few quests with them I was hooked big time!  So I spent the next 5 years playing it on and off.  To be honest, we had a love-hate relationship.  I would spend 12-14 hours a day on it during the weekends/holidays (I kid you not) and then feel horribly guilty afterwards.  Both Joe and I were addicted and our virtual accomplishments in WoW became more important than our real life achievements.

But I finally quit the game for good last year and haven’t touched another game until a few months ago when Joe (again) forced me to download Steam (a software developed by Valve Corporation used to distribute games and related media online, or as Joe explained to me ‘the Itunes of video games’) so I could play this online game by Sega called Spiral Knights.  And I think I played that game about three times? then got bored and quit.  And again, I thought I was too mature for games but alas I was wrong!

Few weeks ago, Joe (yet again) forced me to play this game called Left 4 Dead 2 – it must be my first real first person shooter game and to my amazement it was actually pretty enjoyable!  It’s quite realistic with good voice acting and graphics and made us feel like we were in a zombie movie!  We also managed to get my sister, Judy to play and I think she had fun with it too (she’s not much of a gamer so it must be a pretty awesome game for her to enjoy it).  However, my main gripe with the game is I don’t really like any of the characters and there is no character progression.  I like to identify with my virtual game characters.

So Joe and I decided to try Team Fortress 2 (apparently highly acclaimed game garnering a 92 on Metascore) and man it was kind of lame.  It’s sort of like WoW battlegrounds but more pointless.  All the playable characters are men (sexist!) and to kill enemy players you just click on them with your mouse.

Anyway… you might be asking how this is relevant to ‘Sleeping Kumas’.  Well, my newest collection addition is the Bedtime series Korilakkuma!  And she is my Steam account’s avatar and inspiration to my Steam profile name – KoriMary ^-^

Here is a photo of her below –

Sleepy kumas! The seller kindly took a photo of my Korilakkuma plush for me!

After seeing how cute the actual plush is, I decided to buy the Rilakkuma version too!

And to save money on shipping (I know, horribly bad habit because I end up spending more in the end), I also decided to purchase Korilakkuma from the Bonjour series!

Bonjour series! The Rilakkuma version is not as cute so I decided not to buy. (Picture courtesy of Icecreamdrops' Highwire)

So yea, there you have it!  My newest additions – Bedtime series Kori and Rila and Bonjour series Kori! 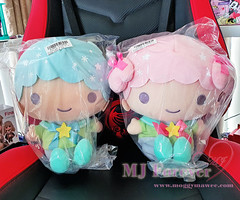 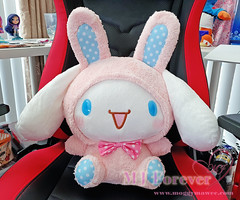